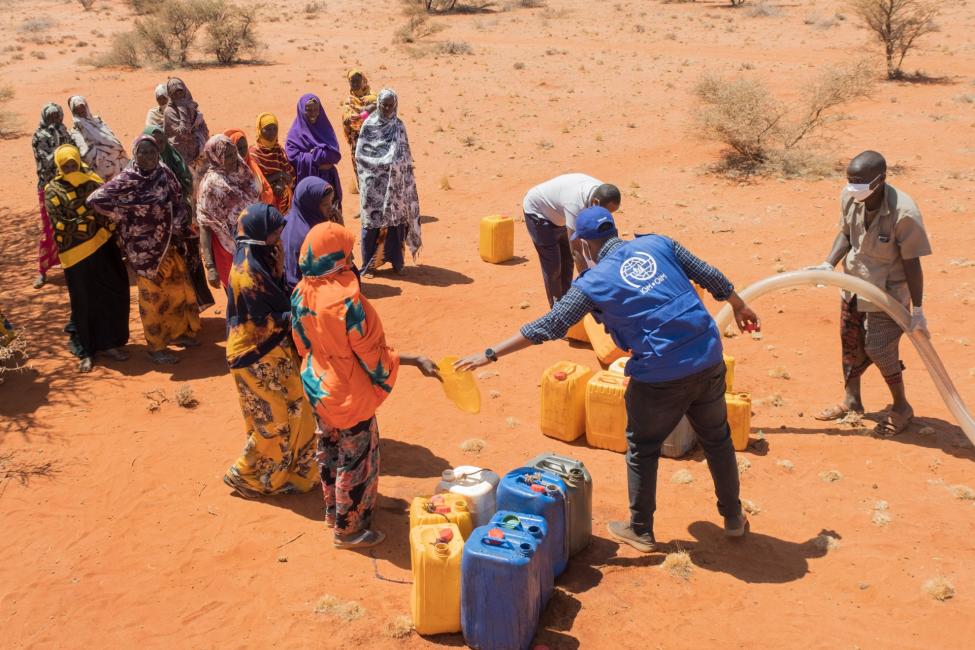 Nairobi – The Horn of Africa is in the grip of the worst drought in decades – parching landscapes, heightening food insecurity and causing increasingly widespread displacement. An urgent and efficient humanitarian response is crucial to avoid large-scale deterioration throughout the region expected by mid-year.

An estimated 15 million people are severely affected by the drought in Kenya, Somalia, and Ethiopia – approximately 3, 5 and 7 million people in each country, respectively.

The unprecedented impacts of multiple failed rainy seasons are threatening to create a humanitarian crisis in a region already negatively impacted by cumulative shocks, including conflict and insecurity, extreme weather conditions, climate change, desert locusts and the negative socioeconomic impacts of the COVID-19 pandemic.

Although the Horn of Africa has experienced climate-induced crises for decades, the impact of the current drought on the arid and semi-arid lands (ASALs) in the region has been especially severe. There is a high risk of famine and malnutrition as the food security situation is deteriorating rapidly.

Pastureland and water points are drying up across the region. Pastoralist and rural communities whose subsistence depend on natural resources are witnessing the death of their livestock and the loss of their livelihoods. Thousands of acres of crops have been destroyed and, in Kenya alone, 1.4 million livestock died in the final part of last year due to drought.

Tens of thousands of families are being forced to leave their homes in search of food, water and pasture, heightening pressure on already-limited natural resources. Drought has also increased the risk of inter-communal conflict, as farming communities and pastoralist communities compete for dwindling supplies of water.

In Somalia, with the worst water scarcity in 40 years in some parts of the country, the government declared a state of emergency in November 2021. According to the latest International Organization for Migration (IOM) Displacement Tracking Matrix (DTM) analysis, drought conditions could imminently displace over 1 million people in Somalia, on top of the 2.9 million already displaced.

Based on previous drought displacement patterns in Somalia, affected populations are likely to move from rural to urban centres. Further displacement into major cities will overwhelm critical services such as health care, increasing exposure to infection, and leading to disease outbreaks (i.e. acute watery diarrhea, cholera) and other major concerns related to lack of health services.

IOM’s flow monitoring has recorded an increase in drought-induced movements from Somalia into Ethiopia, possibly to gain access to water and pasture. However, Ethiopia is also suffering the dire consequences of the drought. In southern and south-eastern Ethiopia, drought has eroded the livelihoods of at least 4 million pastoralist and agro-pastoralist communities.

IOM is working closely with governments, UN agencies and partners in each country to address acute water needs of internally displaced persons (IDPs), migrants and vulnerable groups to prevent a humanitarian disaster. Through its operational footprint, existing logistical capacities, local partnerships in Kenya, Somalia and Ethiopia, and a Rapid Response Fund mechanism in Ethiopia, IOM is well-positioned to respond to drought-affected populations throughout the region.

However, while IOM is actively responding, the needs are outpacing capacities due to limited resources. Additional funding is urgently needed to save lives and livelihoods, mitigate further displacement, and avoid greater needs in the future.

In the longer term, the global climate crisis has underscored the need to increase disaster preparedness and climate change adaptation collectively. This must include addressing structural developmental needs of vulnerable populations and prioritizing inclusive access to natural resources.