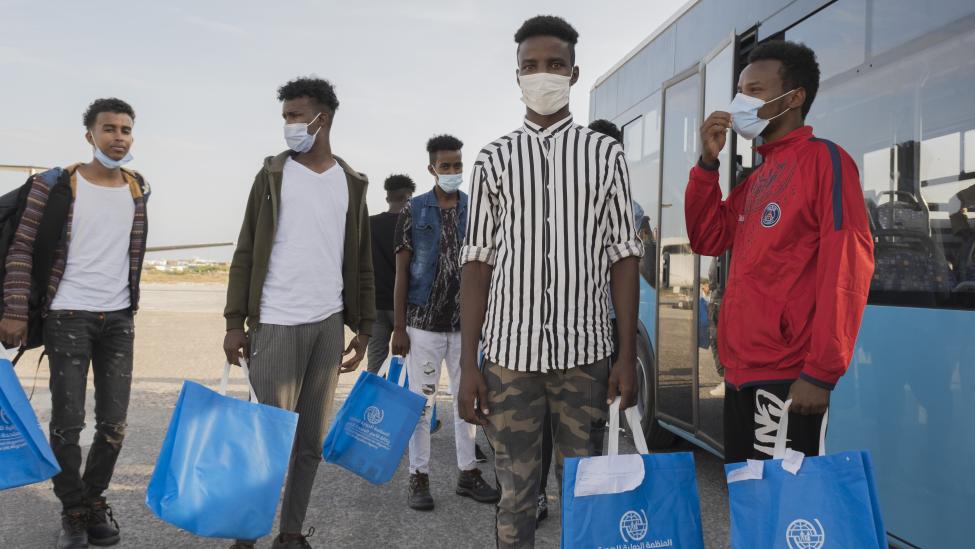 Mogadishu - The International Organization for Migration (IOM), through its Voluntary Humanitarian Return (VHR) programme, facilitated the safe return of 32 Somali migrants in November 2021.

“Currently, there are nearly 6,000 Somali migrants in Libya, many of whom are still stranded.” said Federico Soda, Chief of Mission, IOM Libya. “The VHR programme is a lifeline for these migrants opting to return home and rebuild their lives.”

Ten returnees arrived in Mogadishu, the Somali capital, and 22 in Hargeisa, on 18 and 23 November, respectively. Upon their arrival in the country, the 32 returnees were received by staff from IOM Somalia and provided with post-arrival assistance including basic medical, psychosocial and counselling support, as well onward transportation to their communities of origin.

The returnees are also eligible for in-kind reintegration support which can be in the form of social, psychosocial and economic assistance. Child migrant returnees qualify for assistance enabling them to return to school. Livelihood support can also be extended to the families of minors.

The VHR programme is funded by the EU-IOM Joint Initiative for Migrant Protection and Reintegration (the EU-IOM Joint Initiative) and through the Italian Ministry of Foreign Affair's Migration Fund. Since 2015 the initiative has supported the safe return of over 53,000 migrants from Libya to various countries across Europe and Asia. To date, 638 Somalis have returned from Libya through the programme.

Mariam Yassin, the Special Envoy for Migrants' and Children’s Rights in the Office of the Federal Prime Minister of Somalia, welcomed the group of 10 returnees at Mogadishu’s Aden Adde International Airport. “It was an overwhelming experience for all of us to see you back home. However, there are so many young men and women stranded in Libya and a lot still needs be done in terms of prevention. Every migrant has the right to go back home in a safe and dignified manner,” she said.

Twenty-two-year-old Mohamed Abdi Hussein was one of the 10 returnees. He had left Mogadishu with the intention of reaching Europe. The journey took him through Ethiopia, then Sudan and into the Libyan desert where smugglers demanded that his parents transfer more money or else they would kill him.

Not long after, “they told us they would take us on a boat and that we would reach Europe.” But that was not to be. “After months in the desert, we were taken to a house in Tripoli. Then suddenly, they hid from us, and I never saw them again,” Mohamed said.

Left to his own devices, Mohamed said he decided to continue with his journey. “I tried to join a group of Somali migrants sailing on a boat to Italy. The boatmen took $1,000 USD from me. When the boat was about to sail, we were apprehended by the Libyan Coast Guard and taken to prison.”

Among those at Hargeisa International Airport was Hamda Mohamed, a 21-year-old who returned with her two young children. Battling to hold back tears, she said, “What I am crying for is nothing but the joy of being back in my country. I can't express my feelings in words.”

Hamda added: “Many migrants pay a lot of money to the smugglers and yet die in the desert or at sea without reaching their goal. So, my advice to young people is never to try embarking on such a miserable journey.”

Launched in December 2016 with the support of the European Union Emergency Trust Fund for Africa (EUTF), the programme brings together 26 African countries of the Sahel and Lake Chad region, the Horn of Africa, and North Africa, along with the European Union and the International Organization for Migration, around the goal of ensuring that migration is safer, more informed and better governed for both migrants and their communities.

IOM’s return assistance is grounded in a rights-based approach focusing on the well-being of individual returnees and their communities throughout the return and reintegration process. The Organization’s approach puts individuals and the protection of their rights at the centre of all efforts.