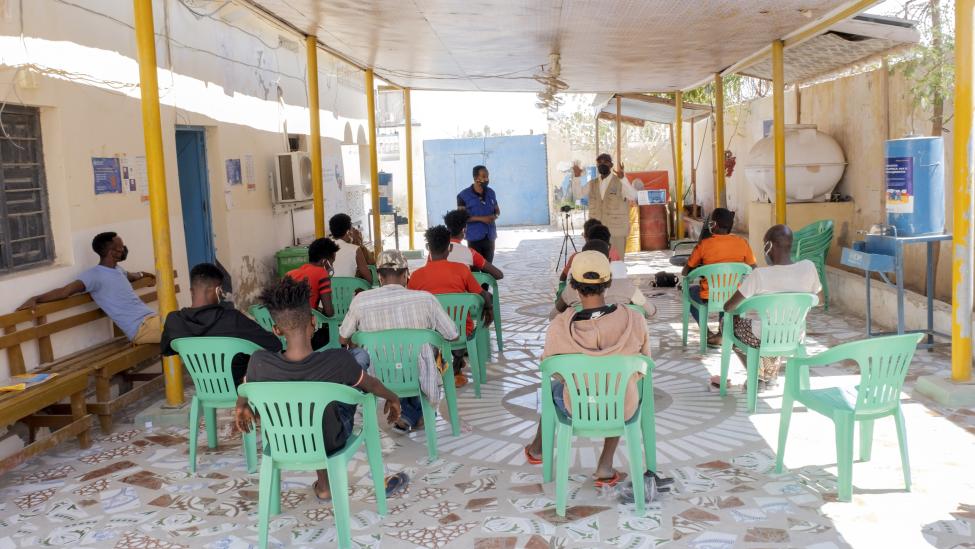 Bossaso - The Migration Response Centre (MRC) in Bossaso, off the Somali coast, best illustrates the support provided to vulnerable migrants by the government, the International Organization for Migration (IOM) and other partners.

Through the MRC, located in Puntland’s main port city, the parties cooperate in providing services to migrants on the move. These range from basic to lifesaving interventions, protection services and consular assistance.

The MRC also operates a hotline through which migrants can request support. Since the onset of COVID-19, the MRC has broadened its outreach services to migrant communities who are among the most vulnerable to the pandemic.

Yet the Bossaso MRC is just one of 14 in the East and Horn of Africa and Yemen. Half of these are on the ‘Eastern Migration Route’ - among the busiest migrant crossings in the world.

In the first six months of 2021, IOM tracked over 130,000 migrant movements on this route. Most of the migrants are young people hoping to find work in the Arabian Peninsula, especially the Kingdom of Saudi Arabia (KSA).

This is by far the route most frequently used by migrants from the Horn of Africa, in particular Ethiopians and Somalis. There are two variations to the route, both taking migrants through Yemen.

The majority of migrants access the sea through Bossaso, from where they cross the Gulf of Aden. Others travel to Djibouti’s coastal town of Obock and find boats that take them to Yemen.

In the wake of movement restrictions resulting from the COVID-19 pandemic, higher numbers of migrants have found themselves stranded. For example, IOM estimates that 45,000 Ethiopians are currently stranded in KSA, with another 32,000 being stuck in Yemen.

Speaking during a virtual meeting with donors and partners on 23 November, IOM’s Deputy Regional Director for the East and Horn of Africa Justin McDermott emphasized the role that MRCs play at this time when migrants are forced to take even more treacherous routes.

He noted that in 2021 around 105 migrant deaths were reported in the Horn of Africa by mid-November, while at least another 30 Ethiopian migrants had perished in a shipwreck off the coast of Yemen. “These incidents signify the critical role of MRCs as a coordination mechanism for the delivery of comprehensive services,” he said.

In response to the need to coordinate assistance to migrants, IOM teamed up with over 38 partners including UN agencies, governments, the Intergovernmental Authority for Development (IGAD) and NGOs, to develop the Regional Migrant Response Plan for the Horn of Africa and Yemen.

The plan complements the efforts of governments and provides a route-based approach to ensure continuity of services in addressing migrants’ needs, including supporting them with sustainable reintegration.
In October, a new strategy for the MRCs was finalised. It commits the parties to increased partner involvement and government ownership in the delivery of quality and comprehensive assistance and protection services to stranded and returning migrants.

In Ethiopia, the five MRCs spread across the country are fully embedded in a migrant protection ecosystem that incorporates different government agencies at both federal and local level. “When we look at the role of government, they manage the MRCs using a whole-of-government approach, through MRC management committees,” said Zerihun Yeshitla from the Ministry of Labour.

From January to October 2021, the 14 MRCs in the region registered over 25,000 migrants stranded on these key routes. They were assisted with shelter, food, personal hygiene products, footwear and clothing, in addition to health and psychosocial assistance, among other types of assistance.

About the EU-IOM Joint Initiative
Launched in December 2016 with the support of the European Union Emergency Trust Fund for Africa (EUTF), the programme brings together 26 African countries of the Sahel and Lake Chad region, the Horn of Africa, and North Africa, along with the European Union and the International Organization for Migration, around the goal of ensuring that migration is safer, more informed and better governed for both migrants and their communities.