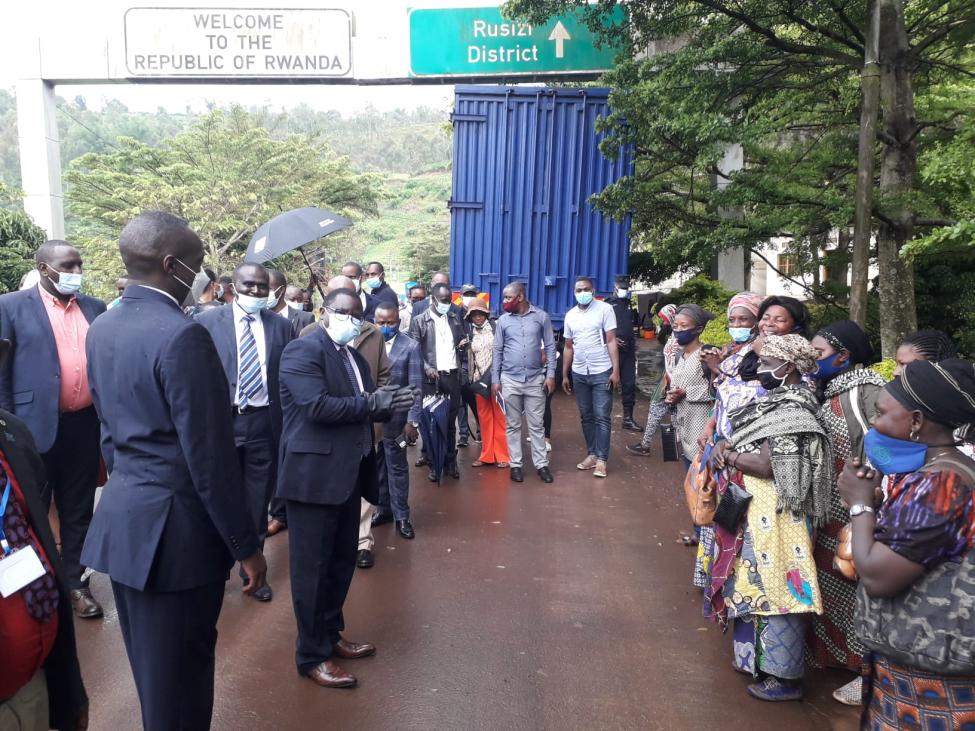 The Rusizi II border is an important trade and transport corridor and the daily movement of the cross-border communities, who cross the border between Rwanda and DRC in search of employment, business opportunities and health care. Credit: IOM/Rwanda/2021

The AU’s agreement establishing the African Continental Free Trade Area (AfCFTA) has focused on the importance of eliminating barriers to foster regional trade to create a single continental market for goods and services for some 1.3 billion people in 55 countries.

The International Organization for Migration (IOM) in partnership with Trademark East Africa (TMEA) is implementing the European Union (EU) funded “Secure cross border social, economic and commercial activities” as part of the efforts to facilitate trade and human mobility in view of fostering regional prosperity through the establishment of a One Stop Border Post (OSBP).

As a key milestone in the governance of the project, IOM in partnership with TMEA supported the bilateral meeting of the Project Steering Committee in Rusizi (29-30/11) between Rwanda and the Democratic Republic of the Congo (DRC), with participation of representatives from the European Union, East African Community, Common Market for Eastern and Southern Africa, CEPGL, the UN Resident Coordinator, IOM and TMEA. The meeting was meant to provide strategic guidance to the implementation of the project and lead to a full-fledged operationalization of the One-Stop Border Post (OSBP) in Rusizi II/Bukavu.

The project is aimed at strengthening the economic integration and social cohesion among cross-border communities in Rwanda and the DRC, through the implementation of an Integrated Border Management (IBM) approach, facilitated by improved infrastructure, including the construction of relevant border facilities comprising an OSBP at the Rusizi II/Bukavu Point of Entry (PoE), as well as support to the establishment of common border management mechanisms and procedures.

Participants at the meeting discussed the bilateral agreement that will govern the OSBP operationalization and provided guidance on the future common procedures. After the meeting, the Steering Committee members visited the construction site, where the authorities of Rwanda and DR Congo laid the symbolical first stones of the respective infrastructures.

“The Government (of DRC) encourages this initiative to build the Ruzizi II single-stop post. Once operational, this infrastructure will allow the implementation of a bilateral approach to integrated management and will make trade operations more fluid,” said Marc Malago Kashekere, Vice-Governor of South Kivu in the DRC.

The UN Resident Coordinator in Rwanda, Fodé Ndiaye noted that “well-managed borders are also borders that, through increased trade and strengthened bonds, bring prosperity to countries, populations and entire regions.” The European Union representative, Lluis Navarro, Head of Cooperation at the Delegation of the European Union to Rwanda said, “the promotion of seamless trade and human mobility between Rwanda and DRC has an enormous potential for the development of the region.”

Justin Macdermott, IOM Deputy Regional Director for the East and Horn of Africa stressed on the need for partnerships between governments to realize effective management of borders. “Without a doubt, this project will consolidate the socio-economic relationships of border communities in South Kivu Province in DRC, and West Province, Republic of Rwanda,” François Habitegeko, the Governor of the Western District of Rwanda said.

The Rusizi II border is a critical geographical location to set up an OSBP due to its importance as a trade and transport corridor and the daily movement of the cross-border communities, who cross the border between Rwanda and DRC in search of employment, business opportunities and health care.