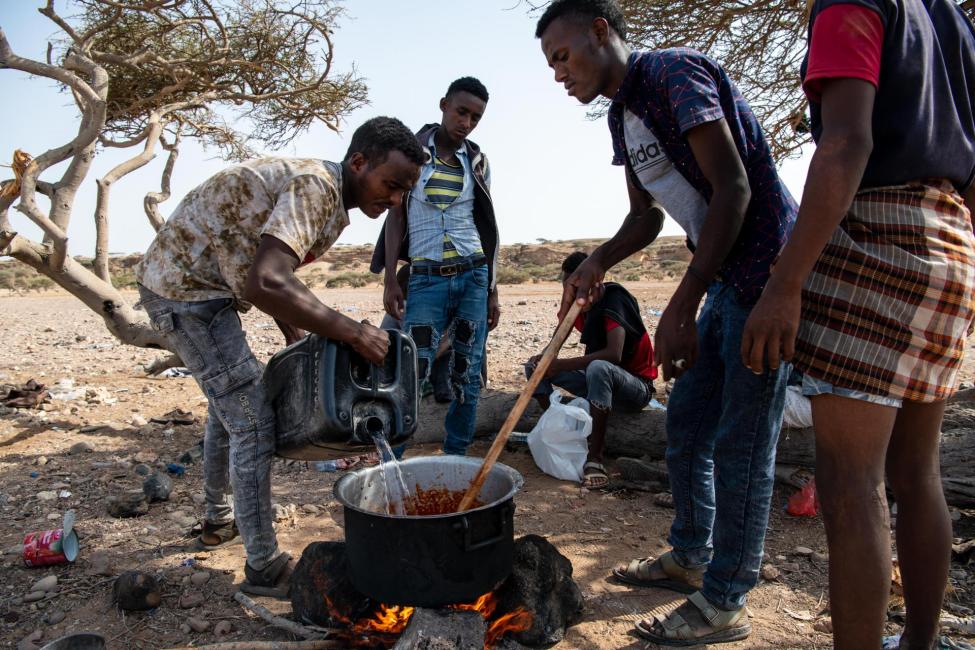 Migrants cook rice in Obock, Djibouti, as they wait for nightfall to continue their journey to Yemen. From there, they hope to reach Saudi Arabia and other Gulf countries. Photo: Alexander Bee/IOM

Djibouti – Host to 150,000 undocumented migrants and a transit hub for thousands of others from the Horn of Africa heading to the Gulf, Djibouti aims to improve their welfare and that of hosting communities through the country's first National Strategy for Migration, launched with the support of the International Organization for Migration (IOM).

The strategy will offer help and promote sustainable livelihoods for migrants impacted by conflict, protracted crisis, climate change and the lack of jobs in the region.

"We hope that this new strategy will contribute to the economic and social prosperity of the country but also to the welfare of migrants,” said Stéphanie Daviot, IOM's Chief of Mission in Djibouti. “This is the result of consultations conducted for several months with all relevant stakeholders."

Launched in the capital this week, the strategy will help coordination between the country’s institutions on migration laws, policies, and future legislation, as well as promoting awareness of the rights of migrants, and their humanitarian and protection needs. It will also support the National Coordination Office for Migration, which is the main interlocuter for partners working in the area of migration.

With a population of only a million people, Djibouti is bordered by Ethiopia, population 112 million, and Somalia, with more than 15 million people, and thousands of migrants mostly from these countries head through Djibouti seeking safety, security or work, primarily in the Gulf nations.  Over half (55 per cent) of the more than 9,900 migrants who arrived in Yemen from the Horn of Africa in the first half of 2021 had travelled through Djibouti, then across the Gulf of Aden.

Many die along the way, from starvation and dehydration in harsh desert conditions. Hundreds are targeted by traffickers and smugglers, risking exploitation and gender-based violence. Increasingly, women and children are transiting through Djibouti. According to the IOM Missing Migrants Project, 97 migrants, including 16 children, have died crossing the Bab al-Mandeb Strait for Yemen since the beginning of 2021.

IOM's country strategy for Djibouti (2021-2024) will support implementation of the government's initiative and enhance collaboration between key migration stakeholders in the country, including civil society and other UN agencies.

The development of the National Strategy on Migration and IOM’s Djibouti plan was financed within the framework of the European Union-funded "Sustainable solutions for the most vulnerable host populations, refugees and migrants in Djibouti" project.

"This new strategy is a decisive step towards effective migration management, in accordance with the commitments made by the Republic of Djibouti, during the signing of the Global Compact on Migration in 2018," said Djibouti's Minister of Interior, Said Nouh Hassa.