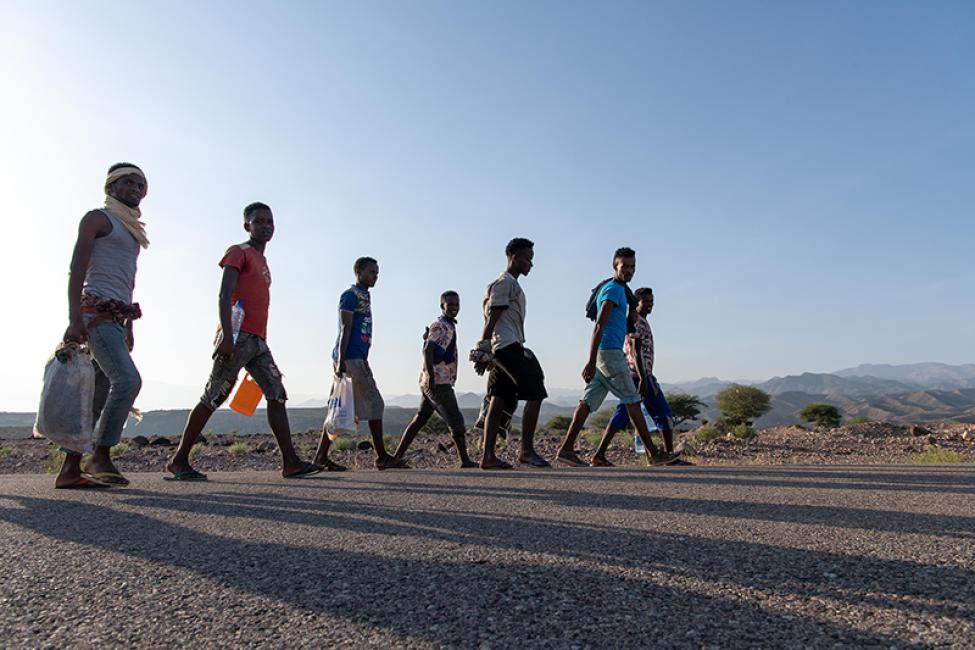 Over one thousand deaths and disappearances during migration have been recorded in the East and Horn of Africa (EHoA) region since 2014.

They are among the 48,000 migrants who lost their lives or have not been accounted for across the world since 2014 when the International Organization for Migration (IOM) established the Missing Migrants Project to document deaths and disappearances of people migrating towards an international destination, regardless of their legal status.

Prominent among the fatalities documented in EHoA are of those travelling along the Eastern Corridor, one of the busiest migration routes in the world. It is used by migrants from the Horn of Africa seeking to reach the Arabian Peninsula through Yemen. Most of those on this route are young Ethiopian nationals motivated by a desire to find work, including as house helpers and labourers. The Kingdom of Saudi Arabia is their main intended destination.

There are two variations to the route, both of which take migrants through Yemen. The majority of migrants access the sea through Bossaso in Somalia, from where they cross the Gulf of Aden, but many also depart from Djibouti’s coastal town of Obock to cross the Red Sea. Different networks of smugglers operate in these areas and facilitate journey onward to Yemen but also back to the Horn.

On the Southern Route heading from the Horn to South Africa, IOM recorded nearly 59,000 movements in 2021, also predominantly by Ethiopian nationals (70%). Travellers on this corridor face dangers such as hazardous transport and asphyxiation, violence and abandonment by smugglers, limited access to medical care and detention. Nevertheless, data on persons who died or went missing during migration on this route are particularly scarce.

Tekeba Ermeko, a 25-year-old migrant narrated his ordeal on the Southern Route. He spoke from Misha woreda in Ethiopia's Southern Nations, Nationalities and People's Region:
“I was in a group of 97 people who journeyed by boat. The trip was very dangerous; we were thirsty and hungry. We only ate one piece of bread in two days, and we saw people die on the road. […] We were arrested on the boarder of Tanzania and Mozambique and were imprisoned for two years. […] If I can’t find work here, I will try to go back. I will try to go knowing it is dangerous. I have to improve my life.”

According to a briefing paper by the IOM Regional Data Hub (RDH) and the Global Migration Data Analysis Centre (GMDAC), 109 migrants (of whom 17 were children) lost their lives or disappeared on the Eastern Route in 2021, up from 59 in 2020, while in 2019, 135 died or could not be accounted for.

Notably, most deaths in 2021 took place in Djibouti (101), where data collection is most robust, between the coast and the town of Obock or while crossing the Red Sea to Yemen, followed by incidents that occurred in Somalia during transit to Bossaso (8). The most frequent causes of deaths and disappearances during migration in 2021 were drowning (64) and harsh environmental conditions (5) – particularly the high temperatures that all too frequently result in exhaustion and dehydration.

“…a key area where many migrants lose their lives on the Eastern Corridor is the particularly rough terrain leading to Obock, dubbed the ‘devil’s bathroom’ for the extreme heat, dehydration, and arduous experience commonly suffered by those who traverse it,” said the briefing note. “The stretch of desert from Moulehoule to Obock reaches temperatures up to 50 degrees Celsius in the summer and migrants walk long distances on foot often carrying little to no drinking water.”

Moreover, smugglers regularly operate boats unsuitable for sea travel and filled to overcapacity. In order to avoid detection by marine patrol, many migrants to and from Djibouti incur additional risk by travelling during rough seas.

In March 2021, smugglers threw an estimated 80 passengers overboard from an overfilled boat carrying up to 200 people, resulting in at least 20 deaths and an unknown number of disappearances in the Gulf of Aden.

In April 2021, 44 people drowned, including 16 children, when a returning boat capsized in the Gulf off the coast of Djibouti. Meanwhile, a similar incident took place in June 2021 with a boat carrying up to 200 passengers that capsized in the Bab-al- Mandab straight near Ras al-Ara, Yemen, resulting in 25 confirmed deaths and up to 175 people who were lost at sea.

However, existing numbers of people who lose their lives in transit or lose contact with their families are underreported and many such cases are never accounted for. In view of this information gap, RDH and GMDAC recently joined efforts to strengthen the collection of verified data in close collaboration with Member States.

The programme also works with partners to locate and rescue people on the move who may need assistance, including the Migration Response Centre in Obock, Djibouti where migrants receive life-saving support. GMDAC’s Missing Migrants Project data collection is funded by the Swiss Federal Department of Foreign Affairs, which also recently funded a study on families of missing migrants in Ethiopia.