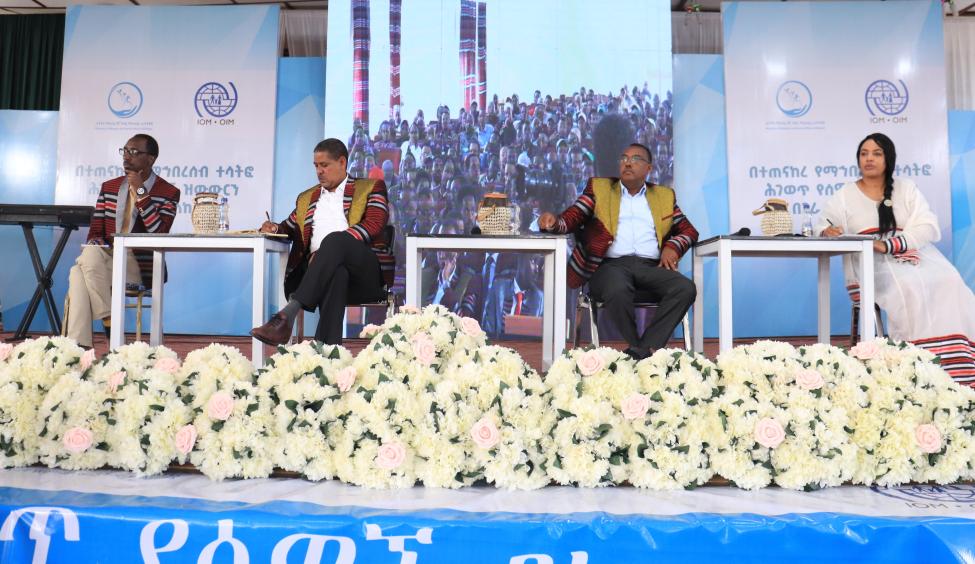 Hosaena, Southern Nations Nationalities and Peoples Regional State (SNNPR), Ethiopia – Following the tragic deaths of 27 Ethiopian migrants on the outskirts of Zambia’s capital, Lusaka, two weeks ago, the Government of Ethiopia, with the support of IOM, the International Organization for Migration, has renewed its commitment to combat irregular migration and promote safe, regular, and dignified migration for all Ethiopians.

The commitment was made at a high-level event on 24 December, attended by Ethiopia’s Deputy Prime Minister and Foreign Affairs Minister, H.E. Dr. Demeke Mekonnen, and other senior government officials including the Minister of Women and Social Affairs, H.E. Dr. Ergoge Tesfaye, the event organizer; the Minister of Justice, the Minister of Health, the President of SNNPR. UN agency representatives, NGOs, and local communities were also in attendance.

The Government of Ethiopia, IOM, and its partners are increasingly concerned about the rising number of migrants facing life-threatening situations and death during their migration journeys, often in search of work, and particularly on the ‘Southern Route’, from the Horn of Africa to countries in Southern Africa.  Less than two months ago the bodies of 30 Ethiopian migrants were found dumped in a mass grave in Malawi. The deceased were all believed to be trying to reach South Africa. Ethiopia’s Ministry of Women and Social Affairs (MoWSA) has recorded the deaths and disappearances of some 6,000 migrants on the ‘Southern Route’ between 2010 and 2019.

An estimated 17,000 Ethiopian migrants start similar journeys each year. A recent report by IOM found that nearly all Ethiopians traveling the ‘Southern Route’ are from SNNPR. Most of the migrants are unemployed youth.

Unfortunately, due to the irregular nature and circumstances in which many of these young people leave home, they are often targeted and exploited by people traffickers and smugglers. Many face detention and deportation, and women may experience sexual violence.

The Ethiopian government has put the migration agenda among its top priories. The Deputy Prime Minister overseas a national council that has been coordinating migration management initiatives for the last 10 years. A national migration policy, aligned with the African Union (AU) and Intergovernmental Authority on Development (IGAD) migration policy frameworks and country priorities, is awaiting endorsement by the Council of Ministers. This policy is comprehensive as major migration domains are incorporated and will shape the migration governance landscape in the country for years to come.

“Mobilizing communities is a crucial part of IOM's approach to encourage informed decision-making with respect to migration, particularly in rural and remote communities with limited access to mainstream media. IOM has done community outreach activities in over 2,500 kebeles (villages) identified as predominant places-of-origin of irregular migrants in Ethiopia,” said Abibatou Wane, Chief of Mission of IOM Ethiopia.

“IOM strongly believes in evidence-based and inclusive migration governance through a whole-of-government, whole-of-society approach and through regional integration and international cooperation on migration that addresses migration challenges and ensures that migration takes place in a safe, orderly, and dignified manner.”