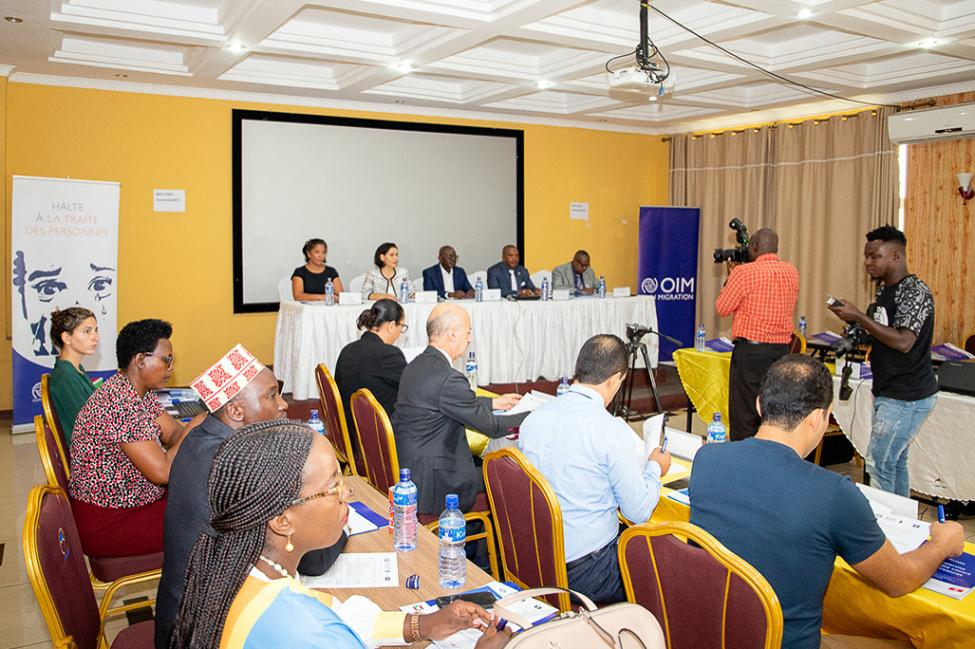 Bujumbura – The International Organization for Migration (IOM) brought together government officials from Tunisia and Burundi to discuss and share best practices on how to effectively tackle human trafficking in the countries.

A delegation from the National Instance for the Fight against Trafficking in Persons (INLCTP) of the Republic of Tunisia made a week-long visit to Burundi to meet with the National Commission of Concertation and Follow-up for the Prevention and Suppression of Trafficking in Persons (CCSPRTP) of the Republic of Burundi as well as Burundian institutions and local non-governmental organizations working in the area of human trafficking.

Both Tunisia and Burundi are grappling with cases of trafficking in persons targeting mainly women and children. Human trafficking is a serious crime and occurs all over the world and affects almost all countries. Burundi and Tunisia are countries of origin, transit and, in some cases, destination for victims of human trafficking.

"Trafficking in human beings is nothing less than a violation of human rights and deserves special attention to ensure its eradication," said Colonel Epitace Masambuko, President of CCSPRTP.

The study visit is part of "Improving human security of communities affected by trafficking in persons in Burundi" project funded by the Kingdom of the Netherlands. It was jointly organized by IOM offices in Burundi and Tunisia, in collaboration with the CCSPRTP. It involved a series of workshops bringing together four representatives of the INLCTP, the ministries involved in the fight against trafficking in persons, representatives of the police and the judiciary, and non-governmental organizations.

"We are happy about this cooperation between the respective bodies of our countries in charge of the fight against trafficking, which will support our common efforts to fight against human trafficking and organized crime,” said Raoudha Laabidi, President of the INLCTP.

The visit also provided an opportunity to assess the latest progress made by the Burundian government in the fight against human trafficking – namely Tier 2 reached in 2022 according to the annual Trafficking in Persons report prepared by the United States Department of State – and to discuss good practices to better counter this crime at the level of the criminal justice system, the security system, and the mechanisms for prevention, protection and assistance to victims and survivors of trafficking.

The Tunisian delegation shared with their Burundian counterparts the country’s experience with the development of the National Referral Mechanism (NRM) for victims of trafficking in persons and presented various tools.

The exchanges also focused on strengthening the processes and mechanisms for sharing and collecting information as well as referrals between the various key players to bolster the identification of potential victims of trafficking in order to ensure rapid and effective action to protect them.

The delegation visited the temporary shelter of the Association d'Assistance des Jeunes Vulnérables pour le Développement in Muyinga, which hosts victims of trafficking referred by IOM and other organizations.

The visit culminated in the adoption of a cooperation framework based on the recommendations made during the visit, including a partnership agreement on the exchange of expertise and information between the CCSPRTP in Burundi and the INLCTP in Tunisia.

The visit follows an earlier one organized in Tunisia in 2019 which brought together representatives from the two nations. The work carried out is in line with the joint efforts of the Government of Burundi and IOM.

IOM Burundi Press releases are available on: https://eastandhornofafrica.iom.int/ and www.reliefweb.int