IOM Rescues More Than 100 Migrants Abandoned by Smugglers in Djibouti 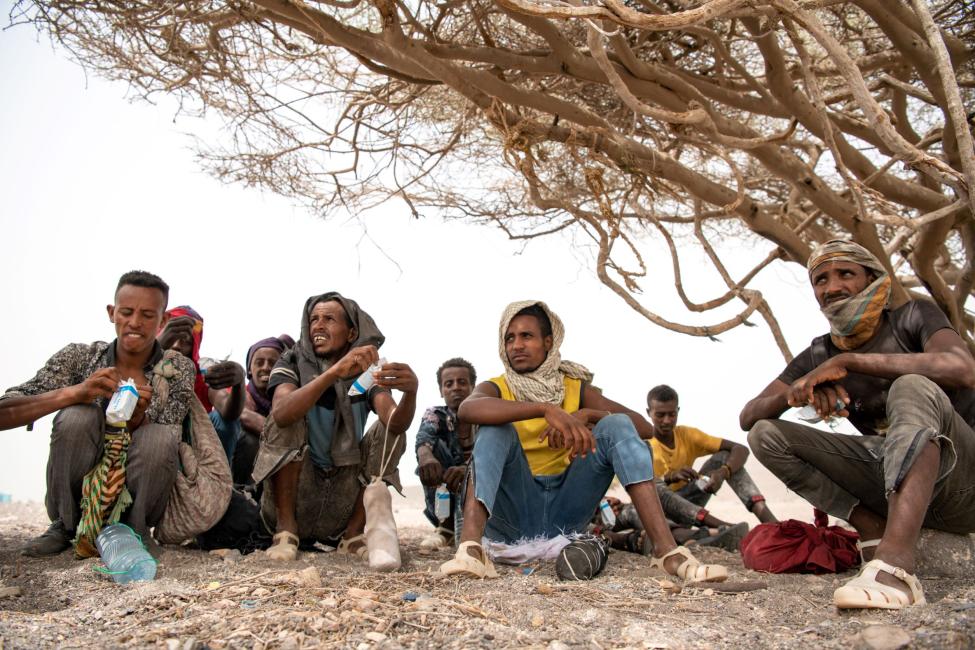 Obock, Djibouti – More than 100 migrants, including women and children, have been rescued by the International Organization for Migration (IOM) after they were abandoned by smugglers in Obock, Djibouti.

The rescued migrants had been stranded for five days in the desertic area of the Obock region with little to no food or water, as they tried to cross the Bab El Mandeb strait to Yemen.  Among the stranded migrants were five unaccompanied children, some aged 15 years old, or less. They were attempting to make the journey alone to Yemen, hoping to continue to Saudi Arabia.

During those five days, the migrants received some assistance from the local community before IOM’s mobile teams rescued them.

During the months of June and July, temperatures in the Djiboutian desert can reach up to 50 degrees. This treacherous heat is  further aggravated by the Khamsin, a burning wind from the north that hits the area during the summer, moving heavy clouds of dust that sometimes reduce visibility to less than a meter.

In addition to the migrants traveling to Yemen, those returning from Yemen were also dropped off along the Obock region’s coastlines during the night. As a result of increased Coast Guard interceptions along the coastline, smugglers are dropping migrants further away in the desert, sometimes more than 70 kilometers from the nearest town. They are forced to walk long distances in order to reach nearby towns –often without any water or food.

With the Khamsin, the sea becomes very rough, reducing the Coast Guard's capacity to intervene. As such, smugglers are taking increasing risks by crossing an even more dangerous sea, thus putting the lives of thousands of migrants at risk.

IOM deployed its entire team until late at night to provide the stranded migrants with life-saving assistance and bring them safely back to Obock city. Despite the difficulties encountered in the desert and IOM’s awareness campaigns, some of them preferred to stay in the desert, hoping they would find a way to make it to Yemen, a country still at war.

Every year, tens of thousands of migrants transit through Djibouti on their way to Gulf countries, seeking better lives and fleeing poverty, conflict and natural disasters. Most of them are exposed to a harsh climate, limited access to water and food, and fall victims to traffickers who exploit and abuse them.

The situation in the desertic Obock region in northern Djibouti is alarming. With thousands of migrants on the road, IOM is working around the clock to try and meet their needs.
Whilst IOM was able to provide emergency assistance to the more than 100 stranded migrants in the desert, a young migrant woman was found dead as a consequence of extreme exhaustion and dehydration, only 500 meters from the IOM managed Migration Response Centre (MRC) in Obock.

IOM in Djibouti continues to work throughout the country to provide assistance and protection to vulnerable migrants crossing the country. In 2022, more than 4,000 migrants were assisted by IOM’s mobile unit.

The most vulnerable migrants, women and children, are hosted at the Migrant Response Center in Obock where they receive medical and psychosocial assistance, shelter, food and hygiene kits while waiting for their voluntary return to their country.

Eugenio Ambrosi, IOM Chief of Staff, who joined the IOM mobile unit during his mission in Djibouti, highlighted the rising humanitarian and protection needs and the importance of continuing lifesaving work to help stranded migrants in extremely vulnerable situations in Djibouti.

These interventions are made possible through funding from the European Union (EU) under the “EU-IOM Joint Initiative for migrant protection and reintegration”; (ECHO) “Direct assistance to migrants in vulnerable situations transiting through the migration corridors in Djibouti” and the (EUTF) “Durable solutions for refugees, host communities and vulnerable migrants in Djibouti.