New Ministerial Declaration on Migration, Climate Change & Environment is endorsed by Presidents and Ministers from the East and Horn Africa, in Kampala, Uganda 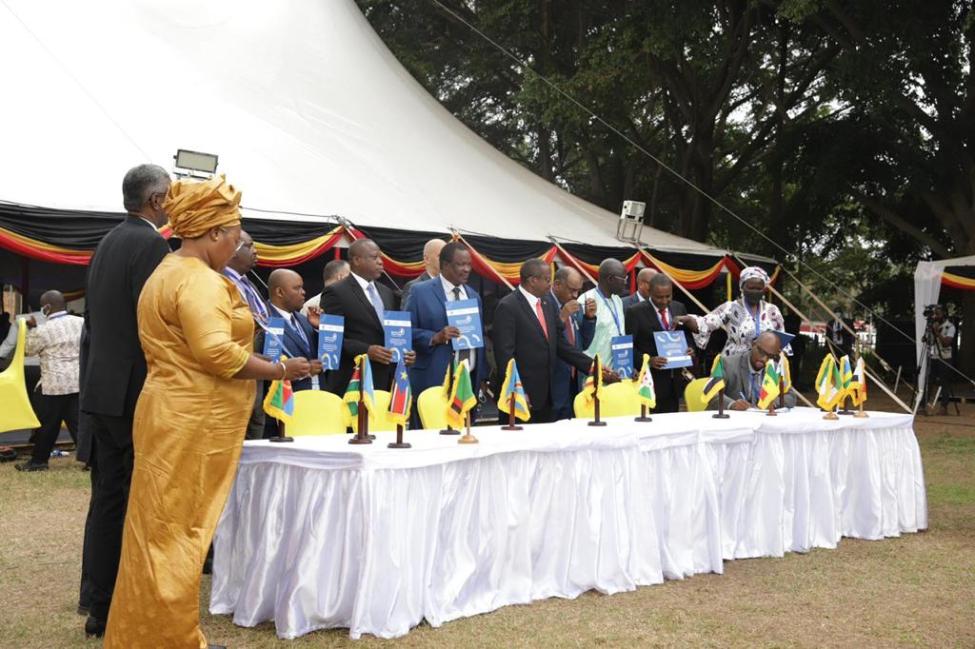 The Presidents of Uganda and South Sudan, Ministers and high level representatives from  Burundi,  Djibouti, the Democratic Republic of Congo, Eritrea, Ethiopia, Kenya, Rwanda, Somalia, South Sudan, Sudan, Tanzania, Uganda, as well as Senegal, which holds the current Presidency of the African Union, Egypt which holds the Presidency of the COP27, Algeria, and Zambia, the current Chair of the African Group of Negotiators, have endorsed a new Declaration on tackling climate change induced migration and displacement. The signing was preceded by a two-day conference hosted by the Government of Uganda’s Ministry of Water & Environment, in partnership with the International Organization for Migration’s (IOM), East & Horn of Africa Office, the United Nations Framework Convention on Climate Change (UNFCCC) and East African Development Bank (EADB)’s Regional Collaboration Centre (RCC) based in Uganda.

The ‘Kampala Ministerial Declaration on Migration, Environment & Climate Change’, which was signed in the Ugandan capital, Kampala, is aimed at bringing nations across the East & Horn of Africa region together to prioritize, respond to and galvanize global support to deal with the harsh impact of climate change on human mobility.

The impact of climate change in the region is severe. Four consecutive failed rainy seasons in the Horn of Africa have left tens of millions of people grappling with the worst drought in forty years.  Millions of people across the region have been displaced and are on the move due to climate change induced disasters. More than 18 million people are at risk of famine and hunger. Drought has already led to deaths in Somalia, Ethiopia, and Kenya. Meanwhile countries like South Sudan, Uganda and Burundi are experiencing the worst floods and landslides in living memory, destroying entire villages and thousands of homes. Agriculture and farming on which so many rely, has been decimated. The toll on income and livelihoods is immeasurable.

Major cities in the East and Horn Africa have witnessed unprecedented increases in weather temperatures. The ice cover of both Mount Kilimanjaro and Mount Kenya, two of Africa’s highest mountains has decreased significantly in the last decade.

The climate change crisis in this region is leading to forced migration, internal displacement, and is driving people across borders. The humanitarian needs are immense, and there is intense pressure on resources including access to water and land, vital for migrants, displaced persons, and host communities.

The newly signed Declaration is an urgent call for the world to respond to the impact of climate change on human mobility across the region and continent, and support affected communities, who are among the world’s most vulnerable, to adapt to climate change realities.

Leaders who signed the Declaration are hoping for its priorities to implemented by governments across the region and most importantly be considered at COP 27 and tabled for discussion in the next Conference of Parties. This year, the United Nations Conference of Parties, which assesses progress in the implementation of the Paris Agreement, is taking place in Africa, in Sharm El Sheikh, Egypt in November. COP 27 is seen as a significant opportunity for the African region to voice its concerns as articulated in the new Declaration and influence efforts to respond to climate change induced human mobility.

“Climate change is one of the greatest challenges of our time. The commitment we have made today is our first landmark strengthening our cooperation in relation to climate change induced mobility and its associated effects.” President Yoweri Museveni, Uganda.

“Despite the urgency of climate change, we are yet to receive the 100 billion dollars pledged by the developed world to the developing world in 2020. While this amount is below the target, we have not received it yet and we hear that it will be raised in 2023. By then it may be too late” President Salva Kiir, South Sudan.

Signatories to the new Declaration highlighted the fact that Africa contributes the least global pollution, but is disproportionately affected by the climate change, primarily caused by the richer nations of the world, and the impact and link to migration has not been adequately considered or dealt with. Therefore, more financial aid is needed to support communities to adapt and support strengthening the resilience of populations to the ever-increasing intensity and frequency of climate shocks, forcing individuals, families and communities to move.

Egypt as the COP 27 Presidency holders promised to bring the Declaration and its priorities to the attention of COP organizers in Sharm el Sheikh .

“I want to assure you that we will do everything in our effort to make COP 27 Africa's COP , and to raise the level of ambition not lower it.”  Ambassador Ashraf Swelam, Egypt’s Ambassador to Uganda

IGAD, the Intergovernmental Authority on Development which is composed of nearly 70% arid and semi-arid lands whose populations are suffering from the increasing intensity, longevity and frequency of droughts, welcomed the Declaration.

Travelling from the UNFCCC Secretariat in Bonn, Germany, Deputy Executive Secretary affirmed the importance of taking forward the Declaration.

“Climate change is not a threat, it’s a catastrophe. That's why we are here today. Now is not the time to retreat on promises made. Now is the time for world action, tough decisions, and accountability,” Ovais Sarmad, Deputy Executive Secretary, UNFCCC

“The signed Declaration is a testimony of leadership that is being taken on advancing regional cooperation and articulating a call for averting, minimizing, and addressing displacement from climate change and disasters. I hope that this important regional call for action stays as a morally binding reference beyond COP27.” Ugochi Daniels, Deputy Director, Operations, IOM, the International Organization for Migration.

Following the signing of the Declaration, the Government of Uganda, IOM and the UNFCCC will be working on the outreach, advocacy and political engagement required to bring the hopes and aspirations of millions of Africans on migration, environment and climate change, and as enshrined in the Declaration, to COP 27 and beyond.