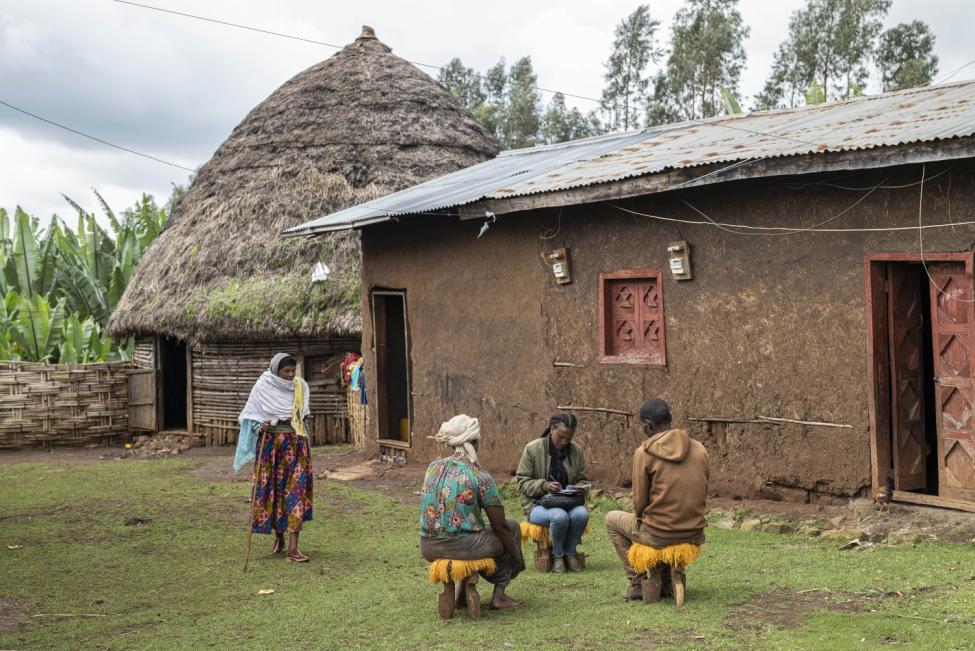 Nairobi – For over a decade, the United Republic of Tanzania has seen a substantial number of migrants in vulnerable situations transiting through its territory along the Southern Route, which runs from Ethiopia and Somalia towards the southern countries in the continent such as Malawi, Mozambique and Zambia, en route to the Republic of South Africa.

Irregular migration along the Southern Route is driven by factors such as poverty and the lack of livelihood opportunities, political instability, and climatic shocks, and entails travel by road, water or, less frequently, air, depending on the migrants’ economic status.

Prospective migrants tend to view South Africa as a destination with lucrative employment opportunities, facilitated by the presence of well-established Ethiopian and Somali diasporas that often sponsor the movement of individuals from their hometowns and provide employment once migrants arrive at destination.

Abraham, a young Ethiopian boy, explained his desire to leave home in search of a better life. He spoke from one of the villages in Ethiopia's Southern Nations, Nationalities and People's Region (SNNPR): “I want to go to South Africa. I do not know if I can change my life here because the region is so poor. I have seen people that go abroad really improve their lives. I have been told that I might die if I try to go there because the journey is very dangerous, but I want to try my luck.”

The distance travelled, the multiple border crossings, the reliance on brokers and the switching of intermediaries along the way heightens migrants’ vulnerability to various forms of protection risks, a new study released by the International Organization for Migration (IOM) Regional Data Hub for the East and Horn of Africa, finds.

Facilitated by an intricate network of migrant smugglers and traffickers, the journey exposes migrants to violence, exploitation and abuse in transit countries and at destination. Migrants are often subject to deception, ill treatment and even death.

The difficulty of the journey and the risks involved have discouraged some prospective migrants from embarking on the journey along the Southern Route. Fana*, a young Ethiopian girl interviewed in a village in SNNPR, recalled, “My cousin, Yosef who was 18 years old, died in Tanzania while undertaking the journey to South Africa. He died in a truck because he could not breathe. I’ve heard of many people dying on the way to South Africa so I never want to go there.”

The Southern Route is also largely understudied compared to other migration routes. In 2009, IOM estimated the number of Ethiopians and Somalis travelling along the Southern Route to South Africa at 17,000–20,000 males per year, of whom Ethiopians were the majority. In 2016, the figure was revised using Ethiopian asylum applications in South Africa to project the number of migrants and set slightly below at around 14,750–16,850 individuals per year.

According to the study, migration along the Southern Route is mainly economically driven: 99 per cent of individuals mentioned economic factors among the main drivers of their migration. Most migrants (80%) took between two weeks and three months to reach the United Republic of Tanzania. Money to pay for the trip mostly came from family, often as a result of selling assets (37%).

Nearly all migrants were travelling with a broker and hence were smuggled migrants; however, exploitation and deception were often employed and smugglers often withheld, misinformed or actively deceived them, an indication that smuggling of persons may in some instances result in human trafficking along this route.

An overwhelming number (97%) of migrants stated that they experienced a severe lack of food, water or shelter and/or suffered abuse, violence, assault or torture (71%).

In the East and Horn of Africa, IOM, Government and Non-Governmental partners are working to curb transnational organized crime, responsible for much of the smuggling of migrants occurring along the Southern Route, and to address irregular migration through a range of initiatives aimed at promoting livelihood opportunities and establishing legal migration pathways in the region, for example through the establishment of Bilateral Labour Migration Agreements, among others.

This study is the first report of the IOM Southern Route research series, aiming to update the 2009 IOM study In Pursuit of the Southern Dream: Victims of Necessity Assessment of the Irregular Movement of Men from East Africa and the Horn to South Africa. This series intends to deepen the understanding of migrants’ experiences and dynamics along this particular route. This contribution will, in turn, help improve policy-making, programming, advocacy and coordination for IOM and other humanitarian and development actors in the region.

Jointly developed by the IOM Regional Data Hub and IOM Tanzania, this study was made possible thanks to the financial support of the US State Department Bureau of Population, Refugees and Migration, through the Africa Regional Migration Program, and the EU-IOM Joint Initiative for Migrant Protection and Reintegration in the Horn of Africa.